The ICL 4130 was the 'real' computer that I cut my teeth on and spent many a happy hour maintaining. I still have full circuit diagrams for it and the engineers' pocket book. It was a 'fully transportable computer' but not easily!! Here is a photo I found on the net of the front of the CPU cabinet: 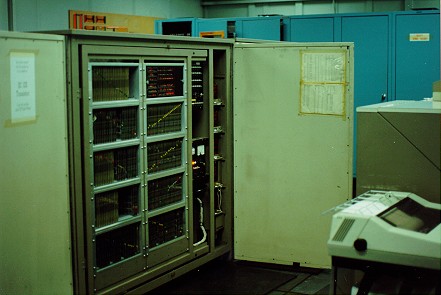 This picture shows a lineprinter, but commonly attached to our 4130s as the operator station was the old faithful ASR 33 teleprinter. You'll also notice the boards have a diagonal yellow line. This is tape or paint on the boards as an indication of the slot they belonged. If as sometimes happened a whole shelf was removed, these markers were useful in ensuring you had put them all back correctly!!!!

The chassis here contained the processor and, what would now be called, the ROM. This machine's brain was put together with discrete diode/diode logic. At the rear of this cabinet we had the interface unit that allowed it to talk to peripherals, other computers and the simulator. The simulator interface (TSTU - Trainer & Simulator Transfer Unit) was a special build and actualy had 'integrated circuits' on it!. The front cabinet (shown) could be swung outward to get to the back plane wiring of the cpu and that of the inteface unit - but make sure the wheel was down first or there was a danger of the cabinet falling over! (I've seen it!). A wire wrapping tool was part of the computer engineers' kit along with a good AVO and Osciliscope.

Here we see a 'front on' view of the cpu cabinet 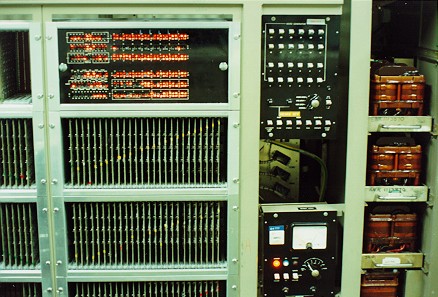 On the right are the rather large PSU's that could be disconnected at the rear (1 x mains and 1 x power out connector) and slid out for quick replacement (look at the size of each transformer! They weighed a bit too - definately a two handed job to replace). The size of these power supplies give an indication of the power consumption of these early computers, and why air conditioning was an absolute must.

The unit at the bottom monitored the power supplies and could be switched to monitor various outputs. Checking the power supply levels was a regular preventitive maintenance task. The meter though was only ever used in fault conditions to see if a supply was missing. The meter was far too inaccurate for maintenance needs, and the bus bars where measured direct with an AVO or digital meter.

Above that, the engineers' panel. If you knew the machine code you could programme this machine off the keys and indeed basic diagnostic checks were carried out here. There where sequences to load registers or memory and start or step through execution of the programme.

To it's left was the engineers' display panel showing a the 24-bit registers and the code/data loaded by the panel. This panel showed the contents of the registers at all times so when the siimulation programme was running these neons (not lamps, nor LED's) flickered and glowed continuously. It was an engineers dread to walk into the room and see these neons static as that meant the programme had halted. 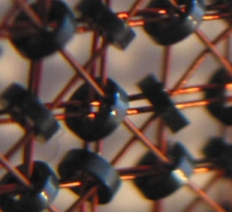 There was another cabinet of the same size as the cpu one and that held the memory. 64K words of core memory. A significant amount :-) and a joy to adjust for optimum performance on a night shift as the read and write currents were adjusted for optimum performance. Although the cabinet was the same size, most housed the electronics, but in the central column was one or two 'core modules' with fans (and filters) above and below to ensure the ferrite cores did not over heat.

There was also an operators console per 4130 (the harrier simulator had two 41302) that had a teleprinter , a paper tape readers for loading the software and a paper tape punches. The simulation software was loaded via 3 reels of paper tape per machine, but we aslo had a vast library of other paper tape programmes used for maintenance purposes. If you worked on these machines, you may remember QCC200 (CPU confidence check) and three suite of PT programmes (ie PT22 - microprogramme test). And for memory, QST2DT (store quality) and STT20 v1 and v2 (v1 for under 8k and v2 for over).

Of course no 'sleep', 'hibernate' or 'suspend' on this machine! If the power went off and then back on, it'd just carry on as if nothing had happened thanks to the core memory

What a machine! I worked on them as they were used in the Harrier GR 3 simulator and the Nimrod MR2 simulator