The ICL4130 computers that drove the Harrier GR3 and Nimrod Flight Deck simulators were loaded with paper tape! The Harrier used two and a half full reels per computer to load up. I dont know how many metres of tape this was but it was collected in large paper tape bins after it was read by the reader.

Often three bins would be used to allow hassle free re-winding. Although there was an electric winder on the pdp 11/45, the 4130 tapes were more commonly hand wound with a mechanical winder. This in itself was an art, especially getting the tape real off the winder. If the centre of the tape came out, that was it - it was major hassle getting it sorted out. Also if you were not careful winding the tapes and caused a tear, oh oh - you were looking at having to punch a new tape which itslef meant reading in a master tape to copy). For minor tears there were special patches that could be stuck on - the paper tape 'plaster' complete with holes for data and sprocket. These could also be used to splice tapes for which there was a precision spicing accessory!

Here's a picture of the punch and reader: 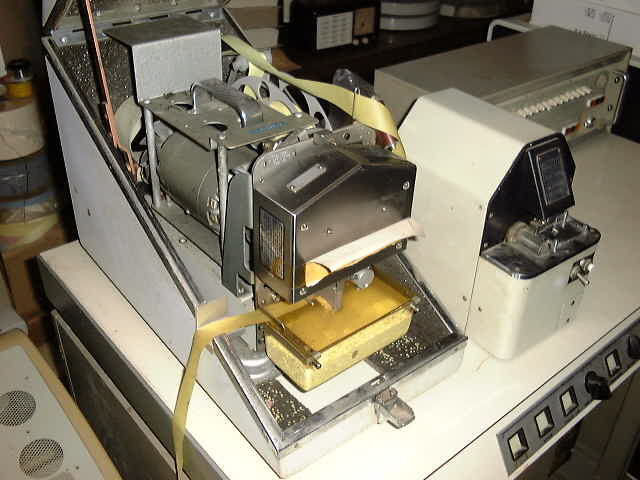 The reader (on the right) was fitted as a pair (one for each 4130) in the operators station (along with a cabinet for the noisy punches) and ASR33 teleprinters. These were high speed readers with a guide to their left to force the tape into the tape bins. Without that the tape would sail several metres to the left easily. It was an optical reader that read 8-bit (and 6-bit) paper tape. This was split into 5 and 3 bits with a sprocket hole that engaged with the drive in the reader. Below is a better picture of the reader, in fact a slightly different model to that above, but is the model I worked with. Here the switches are at the top. The left switch is a straight forward on/off switch and the right forced the tape drive motor to run. This was sometime sessential if for any reason a tape failed to load then you'd use this button to force the remainder of the tape of the reel into the tape bin to allow it to be rewound. 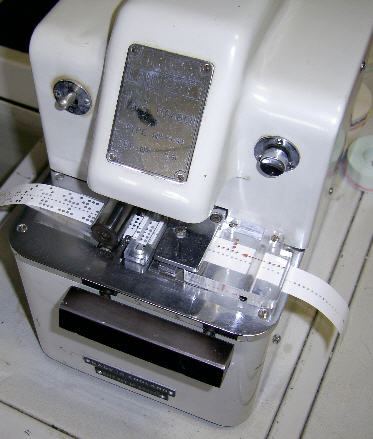 The reader was capable of reading vaying width tapes so had a guide that had to be adjusted to the tape width. One guide can just be seen under teh plastic guide on the right. The where adjusted by the black bar shown, this was pressed down to disengae the clutch and lower the guides so as to allow the tape to be loaded. We only ever used the one width tape (8 bit) and this adjustable guide was a real nuisance if you didnt fully pull it out as it would then very quickly cut the tape you had placed under the roler! If you made that mistake, then it was out with the splice! I couldnt find a photo of the splice we used - it was eight hole (and sprocket) with a red line marking the sproket line, probably about 3 cm long. you peeled of the backing and stuck it carefully on the tape and used a cover on the splice tool to press it firmly down. This picture is the closest I could find to our splicing tool (note that it comes with a punch (as did ours) to manual punch holes if an unperforated section of tape was used in a splice!) and a guillotine to edge the tape

The punches where used to replace tapes. Not a task to be undertaken lightly. This could only be done out of hours as it required the 4130 to be programmed with a tape duplication programme, so it couldnt provide real time simulation services at the same time. It also entailed getting the master tape out of safe storage to provide a known good source. In the photo above you can see the chad collected in it's tray. No doubt today health & safety would have all sorts of precautions for dealing with these small and thin 'dots', in those days the biggest problem they presented was getting them all safely in a bin and thus avoiding the need to get a hoover out! Again in the photo above you can see soem has got out of the container and is lying in the bottom of the cabinet - a regular planned maintenance task was to hoover the punch cabinet clean.

As part of the printer maintenance there was a special pre-oiled tape that could be fed into it so as to lubricate the pins! We also had milar tape for short runs of tape that had lost of use (as these were more robust than pure paper tape)